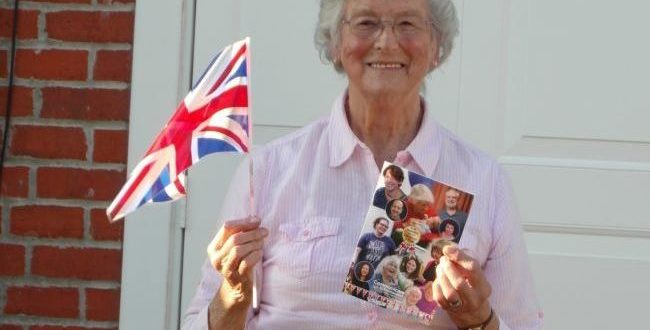 We’ve sent out 1,000 greetings cards to our beneficiaries and service users in the city to celebrate the coming of peace 75 years ago this weekend. We sent the cards to reach out to those at home and to replace planned tea party and lunch events, which were to be funded through grants from the City Council.

Annie Clewlow, our Manager, explains: “The Council has been tremendously supportive of our plans to provide something that includes everyone whose lives we touch in some way. We obviously can’t follow our original approach, which was to host events, but we hope everyone will enjoy their cards and we look forward to all being together again sometime in the future.

We chose to send cards to all our beneficiaries and volunteers in the spirit of ‘we’re all in this together’ and, also, for those of our volunteers who are telephone befriending during the lockdown, this offers another shared experience to discuss. We’ve had a wonderful response so far and those who have contacted us are delighted to have received their cards and to have been remembered.

Some people are comparing the current lockdown with the war, but many of our older service users do feel that the war years were better in many ways, as they were allowed to leave their homes, go about their business and to socialise as normal. Being at home away from friends and family is proving particularly difficult for them at the moment.”

Among those who are currently being shielded at home are husband and wife, Trevor and Margaret Timewell, who are both aged 90. Four years ago, Trevor had a stroke.

Margaret, who was one of the founding members of Communicare in 1991 and lived in Devon during the war, says: “I was an evacuee and I was nearly 10 when war was declared and nearly 16 when it ended in Europe. I went to seven different schools, as one after another got bombed out. I remember celebrating VE Day, it was wonderful – there was a Royal Marine Band, everyone was dancing. We all had a good time and yet the war was still being fought and people were still in the Japanese POW camps at this time.

Trevor was also evacuated as a child and spent most of his time in Bath. He was in the Cadet Force and went to Harvest Camps to support the war effort. I collected rose hips to help provide Vitamin C for babies when you couldn’t get it. I also collected foxgloves. They were used for medicine. I remember vividly seeing men coming into the port at Plymouth in a dreadful state and seeing the hospital trains coming through from Dunkirk. It was awful.

During the lockdown, we’ve been having six carers in every day to help Trevor. We’re lucky, we have each other. I feel very sad for those people who live alone. We also have two Communicare volunteers, who used to visit us before the lockdown. We’re really missing them, but they call us a couple of times a week and they also pop letters through, which is wonderful. I’m calling people from Shirley Baptist Church who might welcome a chat too as I am worried about people being stuck at home alone.

When this is all over, I am looking forward to going to Christchurch to the Cliff Hanger pub, where you can look across and see the whole of the Isle of Wight and The Needles. I would love to then go for a walk along the beach and take in the sea air. Simple things make all the difference.”

Lin Melville, aged 91, also received a card. She was only a child during the war and grew up on a farm in Ireland. Her mother was very strict about keeping her away from adult conversations, so she feels she was very sheltered from the impact.

She says: “Lockdown is jolly miserable. I’m in a flat in a care home and can’t go out. They’ve understandably closed the lounge and dining room, so residents have to stay in their rooms. I’m reading a lot, which I didn’t have time to do before, and family and a friend have been keeping in touch. My Communicare befriender comes once a week and waves from the road outside, they are also keeping in touch over the phone. When this is all over, I’m most looking forward to going out and feeling the wind on my face. I was a sailor and I miss it.”

City resident Doreen Smith, (pictured) aged 83, also received a Communicare card. She was evacuated to Norfolk and remembers the vicar coming into her church school and saying ‘the war is over.’ There was then a party in a field to celebrate. She says: “It was lovely to receive the card, to see all those lovely faces and to know that we are being thought about. I miss being able to see everyone and am really looking forward to when we can get together again.”