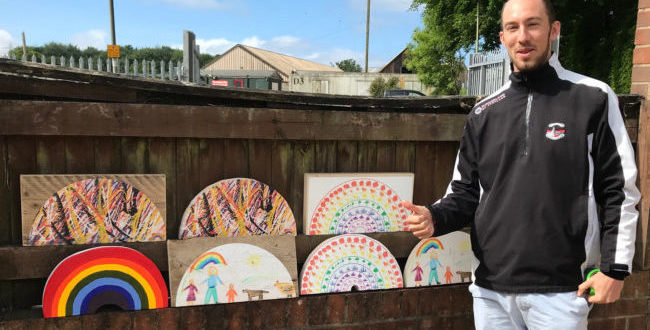 We’re delighted to be The Rainbow Trail’s chosen charity. The Rainbow Trail is a competition to help create a family-friendly Southampton-wide sculpture trail consisting of 100 rainbows carved from upcycled materials symbolising a sign of hope.

The rainbows will be painted with entrants’ winning designs and annotated with stories and poems. The closing date is June 21 and the competition links with national Loneliness Awareness Week starting June 15.

Stuart Shaw from Robert Rose Carpentry, who is organising the competition and creating the trail along with his project partner, artist and creative, Jack Irwin (pictured), explains: “We’ve been given the green light by Southampton City Council for an arts project across Southampton and we’re now raising money to fund this project.

“Any additional funds raised will go to Communicare, which is a friendly, neighbourhood charity that enriches the lives of lonely and isolated people in and around the city. It linked closely with the objectives of our project, namely giving people hope and a connection with others to avoid loneliness.”

The trail’s winning rainbows will be unveiled on June 29. It will then be open for people to follow in Southampton’s central parks in July and August. The organisers believe it could be the largest public display of art Southampton has ever seen.

Jack says: “Now more than ever a sense of community is needed to uplift the spirits of those alone, those who have lost their incomes and who have lost family.”

The Rainbow Trail will consist of 100 Rainbows, carved from up-cycled scaffold board, and printed with designs primarily from Southampton residents. The rainbows will be located all over Southampton as a sign of hope after the COVID-19 outbreak.

Each rainbow will have a QR code, which people can scan to ‘capture the rainbow’ and read the attached stories and poems, which will reflect the various emotions experienced throughout these difficult times.

Anyone can submit a rainbow design, a story or both. The top 100 rainbow designs selected by The Rainbow Trail competition committee, will be printed onto up-cycled material and displayed in the city parks for up to 10 weeks.

Communicare’s Manager, Annie Clewlow, says: “We’re delighted that Stuart and Jack have selected us to partner with them on this wonderful initiative. It’s such a great idea and it’s perfect for us, as it links in with our work to eradicate loneliness and isolation in Southampton. The competition also links in with Loneliness Awareness Week, a Marmalade Trust initiative, starting on Monday, June 15.

“It’s also very apt following the recently released results of the Office for National Statistics Opinions and Lifestyle Survey about lockdown loneliness. It uses results from April 3 to May 3. Of those asked, 30.9% (7.4 million adults) reported their well-being had been affected through feeling lonely.”

Local organisations and businesses can also sponsor a rainbow for £50 with their advert and it will be seen by potentially 100,000 + visitors over a 10 week period. For information on how to become a sponsor see www.jackbsirwin.com/sponsor